Yes, we are woefully behind on our blog.  Since we last posted, we were getting ready to leave New Zealand and sail to Tonga.  As of today (Dec 2017), we are back in New Zealand from Fiji for another cyclone / NZ summer season.  Not sure why it has become difficult to continue to update our blog.  Maybe posting some pictures on Facebook seemed to be enough, but really, it must be that I (Miriam) am lazy.  Some people might think that cruising is just full of cocktails and sunsets.  Sometimes it is like that, but lots of times there is a lot of work involved.  From constant cleaning, cooking, maintenance, and homeschooling, and weather/passage planning/making and boat repairs.  So, in doing all of these things, sometimes the blog gets put aside.  I originally wanted to blog so that we would have something nice to look back upon, especially for the kids.  A nice memento of our time together before they grew up and moved on to their own adventures.  So, back at it.


We had hauled out the boat in April to replace the keel boats and now finalizing our last weeks in Whangarei before getting ready to depart for Fiji. 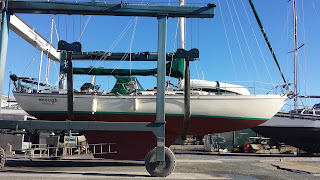 Enough getting ready to go back in the water

We had bought a car to travel around NZ and thought we would sell it.  So, we put it up on Trade Me (kind of like Craigslist/eBay).  But after a week, we decided to just keep the car and come back for it next season.  Yes, we were going to come back to NZ! 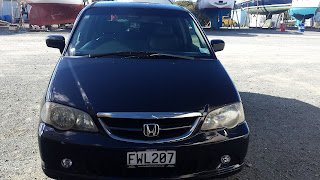 The kids spent their last few weeks at a Minecraft camp and went to the beach for the last days of summer. 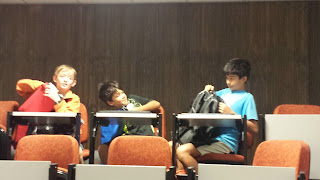 At North Tec for Minecraft with their friend from SV Jade 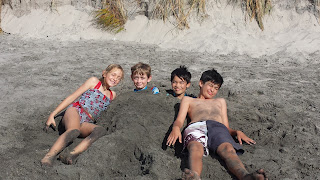 Ocean Beach in the Whangarei Heads with SV Jade 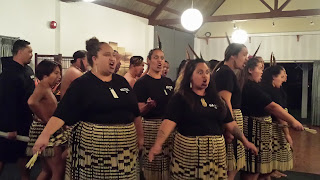 We moved from Whangarei Marina to Marsden Point Marina as it was closer to the ocean and we could clear with Customs and Immigration.  Just waiting for the right weather window.  Our Visas were due to expire on May 24, and we thought we would have left by then as we originally planned on leaving around the 20th.  Well, a low-pressure system showed up and made our minds up that we were going to wait, which meant extending our Visas for just a little bit longer.  We really only needed to extend for a few days, as we found a window and left on May 26th. 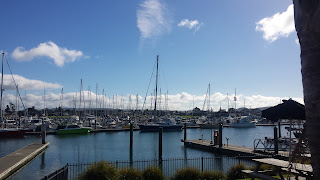 We left Marsden Point on May 26th and had a ok first night.   A little rolly, but not enough to get seasick over.  By the 2nd day, the weather was great.  Nice easy 15 knot winds on the beam.  But the wind started to die and we ended up having to motor.  We were trying to reach Tonga in time for our friend's son's birthday in Vavau.  We had been to Tonga the season before and really enjoyed it, but was really looking for to it, as we were planning on meeting friends we had not seen since French Polynesia.  SV Pesto and SV Sang Vind and hopefully our friends on SV  Tika as they were possibly heading up from the Ha'apai group in Tonga.  We motored for about 15-20 hours not wanting to get caught in any possible bad weather approaching, but also to just see our friends. 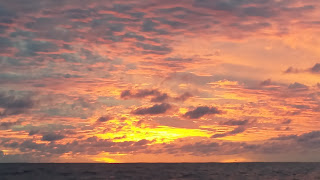 Sunset from our boat as we made our way to Tonga

Unfortunately, Geoff smelled something bad and then noticed smoke coming out of the engine compartment.  We did not know at the time what was wrong, but knew the engine sounded really bad and would not stop smoking.  The alarms were going off on the boat and it was noisy and smelly.  We had to decide what to do.  We could not look at the engine while under way, so we decided to stop in Minerva Reef to determine what was wrong and if possible, fixing it while at anchor in Minerva Reef.  At least the wind did pick up and we could sail to Minerva Reef.  We ended up anchoring in South Minerva Reef.  We did need to start the engine again to come into the Reef. That was very nerve wracking as we did not know if the engine would fail and we could possibly end up on the reef as the entrance is narrow and the wind was not blowing up into the reef, but to the side.  We made it in and anchored right at sunset. Whew!  Geoff was able to look at the engine the next morning, and made a possible diagnosis that we probably took on bad fuel and now our engine had failed.  With this very sad news, we made the decision to sail to Fiji.  As Tonga has no real boat yard for haul out or any suppliers with parts that could help us repair the engine.  So, we informed our friends via Iridium Mail, that we would be heading to Fiji and would hopefully see them as they made their way to Fiji in the next couple of months.  Sigh... 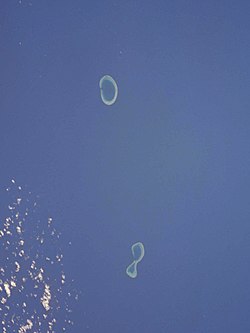 Minvera Reef, two submerged atolls in the South Pacific south of Tonga and Fiji.   We anchored in South Minerva, the one that looks like an infinity symbol or figure 8.  We anchored in North Minerva the year before as we made our way down from Tonga to New Zealand.

Now, getting to Fiji without an engine.  Hoping the wind would continue to be favorable so that we could sail the whole way.  If there was no wind, we did not have a chance of motoring there.  We waited for a day or two and luckily, the wind was good, 15-20 knots for the next several days.  The last day the wind increased to 30 knots on the nose and getting into the pass to Viti Levu, Fiji's big island, was a challenge.  The winds have a cape effect coming from east to west and really sweep around the corner where the pass entrance is.  We could see the pass, but getting there took several more hours that we had anticipated and it was a bumpy ride.
We made it into the pass and the wind was nice and calm, 12 knots, so we were able to sail the next couple of hours to the Quarantine buoy of Vuda Marina!  We were so relieved and exhausted.  We were able to come into the marina and get checked in and finally rest! 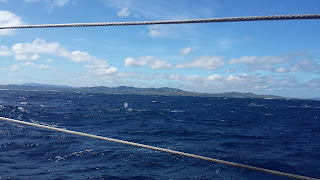 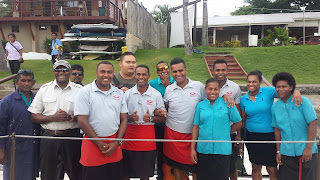 The warmest and friendliest greeting from the folks at Vuda Marina.
What a welcome!

next post - 2 months in the "pit" for engine repair.

Posted by enough sailing at 7:10 PM No comments: