The marina we stayed at in Altata was at least 15 miles north of the breakwater entrance/exit, so it took about an hour just to leave Altata.  We knew it might be a rough exit as it is very shallow and breakers come over the rocks and beach, but it was quite a ride out.  We were happy to leave even though we had such a nice stay during the tropical storm.  We left around 10am and sailed overnight to Mazatlan. 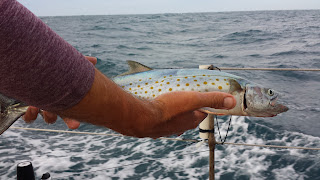 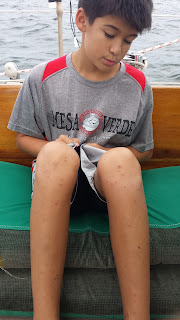 Horatio with LOTS of Jejenes (no-see-ums) bug bits from Altata.

We arrived in Mazatlan in the very early morning hours, 4am, and had to wait for high tide before entering the breakwater entrance to the marinas.  We saw two boats leaving and figured it was the right time to enter.  We practically surfed in and skidded the bottom and kept going! Whew!
We chose to stay at Isla Mazatlan Marina, (it was the least expensive marina, but had nice facilities with free water and electricity) which is pretty much in the center of the main marinas in Nuevo Mazatlan, which is north of the Hotel Zone and the Old Town / Centro area.  It was nice to have a fresh fruit and vegetable truck show up in the marina parking lot every other day!  What a treat.  The area had lots of support for cruisers with a cruiser's guide to Mazatlan.  It was nice to have this guide when trying to understand how to take the bus(es) around Mazatlan, where to eat, get groceries, where the chandleries and boat services were, etc. 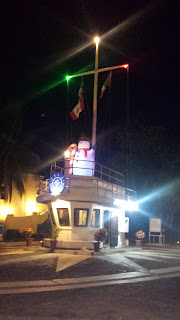 Entrance to Isla Mazatlan Marina (they were ready for Christmas) 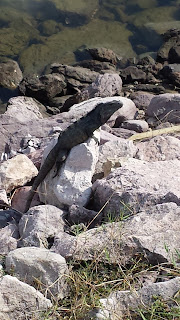 Iguana that live at the marina

We stayed in Mazatlan for about 5 days and really enjoyed our time in there.  We went to the very large Municipal Market, where they sell everything from meat, fish, vegetables, shoes, candy, clothes, etc.  We also went to an Organic Farmer's market,  That was a nice treat to see arugula and quinoa.  We also attended the First Friday Art Walk.  The first Friday of every month local artists have open houses to showcase their work in their galleries around town.  Although it seemed like it was catered to the North Americans, as everyone spoke English and was from Canada or the US, it was a really nice way to visit several galleries in one evening. 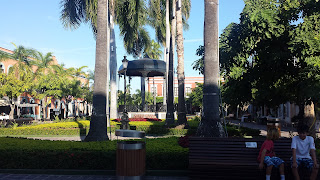 Plaza during the day 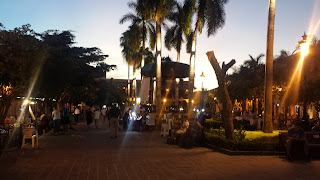 Plaza at night lined with restaurants 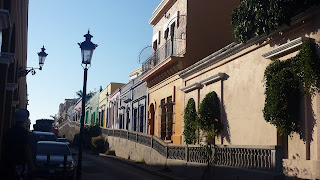 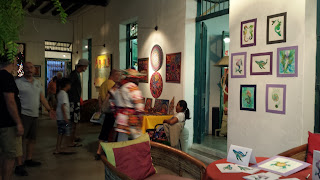 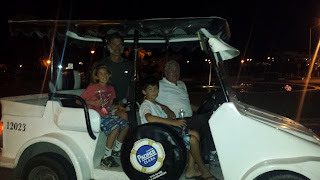 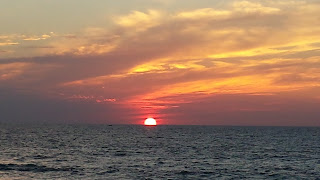 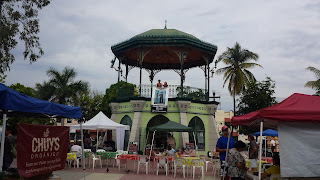 We also spent time at the beach in Old Mazatlan and also further north of the marina at Playa Brujas. The kids loved boogie boarding and swimming.  It is such a nice way to get cool and relax! 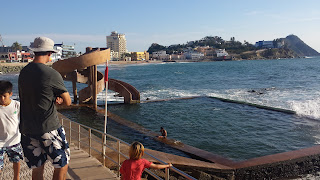 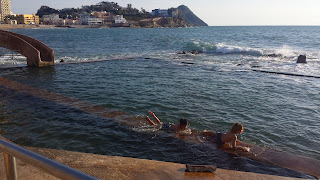 Kids splashing in the saltwater pool 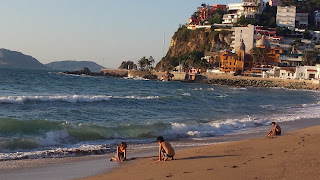 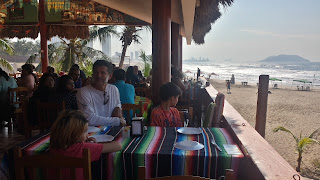 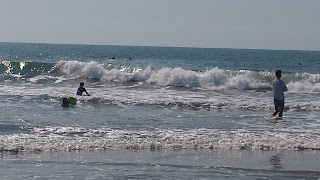 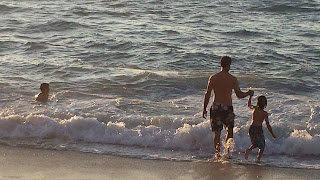 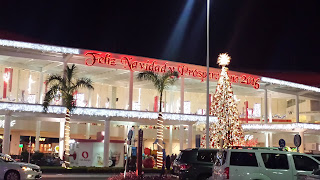 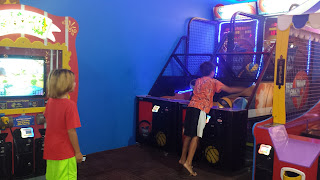 Kids playing in the arcade at the mall.

We had another overnight passage, leaving at 7:30pm and arrived in Isla Isabel around 5pm the next day.  Isla Isabel is considered the Galapagos of Mexico.  The main anchorage was packed. There were at least 6 boats in the small anchorage and there was some pretty big swell.  We decided to anchor outside of the cove and surprisingly it was not too bad.  It was rolly, but not as bad as we had noticed the boats rolling in the main anchorage.  The next day, we rowed ashore and met s/v Shawnigan.  They are from Sausalito, so, we are like, neighbors!  They have children and it was nice to meet other boat kids.
The most unfortunate event at Isla Isabel, was that our camera froze up and we lost all of the beautiful photos we had taken at the "Galapagos like" site!  We are bummed that we couldn't share it, but if you look it up on the internet, you will see what we saw.  Thousands of iguanas, you literally have to watch where you are walking.  Thousands of frigates and blue and brown footed boobies. The amount of fish swimming around your boat and what you see when snorkeling.  It truly was a beautiful site.  The center of the island was a crater with the most serene lake.  Yes, there were mosquitos, but it was still a beautiful site.

Continuing southwestward toward Banderas Bay where La Cruz and Puerto Vallarta are, we made our way to Matanchen Bay, outside of San Blas.  We have read and heard that this is a Jejenes haven due to the town being surrounded by mangroves.  I was ready with homemade bug spray ( witch hazel, tea tree oil, eucalyptus oil, and lavender oil).  But it was raining once we arrived and that kept the mosquitos and jejenes at bay.  Horatio and Miriam were thrilled as they seem to really like us a lot!  We anchored out and were completely alone in a very large bay.  We were wondering if there might be something wrong with this place besides the jejenes.  But another two boats showed up the next day.  We rowed to town the next day, but on our way in, one of the dinghy oars broke completely in half  It was a slight struggle for Geoff to row us all in and back, but he did it.  He spent the next day repairing the broken oar!  The beach town in Matachen Bay was very nice and the people were all very friendly - a very common theme in Mexico.
That evening, as Miriam was reading in bed, she heard a fishing panga close to our boat. She was thinking, maybe someone needs help, but it was midnight!   She went out to look and noticed several boat lights completely surrounding us.  She called for Geoff and he came up and said there were at least 50 boat lights on the bay.   It really freaked us out, but we noticed they were all fishing, some so close their fishing nets were practically under our boat!  They fished until 4 am!!  It was one of the worst night's sleep Miriam has had in a long time. 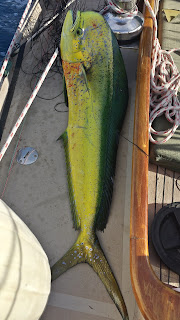 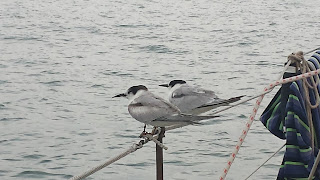 Two terns hanging out on our life lines for about 2 hours.
They were catching a ride to San Blas! 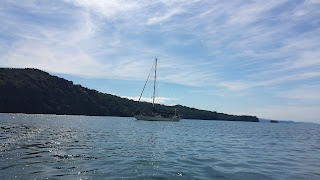 The lone boat in Matachen Bay 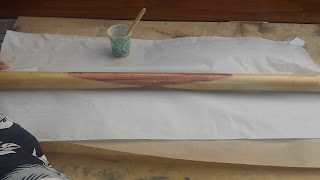 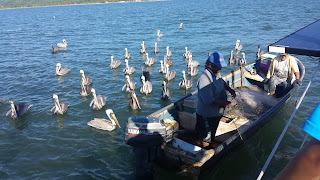 This was during the day, but this is how close the fishing pangas were at midnight!
You can see the corner of our solar panel on our boat.
Notice the pelicans hanging out waiting for a good catch!

Chacala
After two days we made our way to the small beach town of Chacala.  We arrived late afternoon and met another kid boat, s/v Agamere.  There were also several other boats in the bay and it was nice to see several cruisers.   The town was very small, but very quaint.  Nice restaurants on the beach and some beautiful vacation homes surrounding the bay. 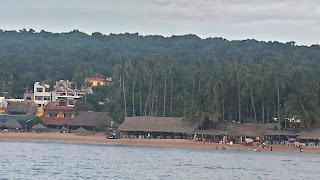 Some of the restaurants on the beach in Chacala 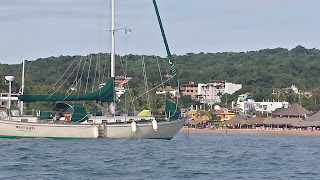 Now we were heading into Banderas Bay and the marina in La Cruz, where we were planning on meeting friends for Christmas.  The kids were soooo excited as the La Cruz marina is known as the "kids marina".  It is suppose to have a Kids Club and a Kids Net (where only the children talk on the radio to share information).  They could not wait to see other boat kids they already knew and have hung out with.  But, we decided to anchor out in Punta Mita for a night before heading the about 8 miles into La Cruz.  Punta Mita is on the far North side of Banderas Bay, with La Cruz toward the northeast and Nuevo Vallarta toward the east and Puerto Vallarta toward the southeast.    It gave us a little downtime to just do nothing on the boat!  Nice town with lots of big and beautiful hotels.  The Four Seasons and St. Regis are both in Punta Mita.

Posted by enough sailing at 7:43 PM