Hao – Makemo
The Tuomotus are about 400-500 miles southwest of the Marquesas depending on where you depart and arrive.  We decided to depart Fatu Hiva in the Marquesas for the atoll called Hao.  The evening we left, it was almost a full moon and the wind was calm.  We felt we might actually have to motor since the wind was so light.  Well, we then got a big surprise on the 2nd day as the wind really picked up and shifted directions and a squall overcame us.  From then on, it was horrible swell and 30 knot heavy wind on the nose.  It felt like we were bashing into the waves the whole time.  By the 4th day, we were about 60 miles from trying to enter the pass of Hao and decided it was just going to be too horrible to even try and enter the atoll.
The thing about these atolls is that you have a narrow pass to enter which has to be entered during slack tide.  So, from an aerial view, it’s like looking at a big circle or oval, with a small slit / opening in the circle/oval, which you can then enter the circle at the right tide.  Some of the atolls have two passes, most have one.  Most of these atolls can also have 3-4 knots of current, if not more, running either against you or with you coming in/out.  Also, you need to enter these passes during morning light hours, as there are many coral reefs and rocks to navigate around and can only be seen when the sun is behind you or above you.   It is pretty tricky to enter paradise!  Once you are inside the pass, and in the lagoon it’s like you’re in a different weather pattern all together.  Most of the atolls do not even a magasin/store.  Most consist of a few houses and might have a place a small village.   Some atolls have a village with a store and maybe wifi.
As the swell and wind were so bad, we thought waiting for slack tide and trying to enter into Hao would be a bust, so we decided to head further north about another 120 miles and enter the atoll of Makemo.  We entered Makemo and the wind and swell was not as bad, but at the anchorage where the town was, it was very rolly as there was no protection from the wind or swell.  We didn’t even get the dinghy down to see the village.  The next day, we headed for an anchorage in the middle of the atoll, which was protected by a nice coral reef.  It was quite an adventure to navigate the bommies (coral heads) that are scattered throughout the atoll.  It was like a minefield.  You have to have look outs at the bow to avoid literally running into these bommies and putting a huge hole in your boat!  We were happy to arrive at the middle anchorage as we saw Pesto and Sarita there.  We had cocktails and a bonfire on the beach that night with them and met 3 other boats, Valindra, French Curve, and Tigress.  This really was a very magical anchorage.  White sand beaches, great coral to snorkel around and calm clear water.
The kids decided to have a Survival camp on the beach one night.  So, we left the kids with Raquel and Paulo from Pesto, on the beach with a tent, water, Swiss army knife, pork and beans, fruit loops cereal. handheld radio and their survival instincts.  We rowed back to the boat and every once in a while looked out with binoculars to see if they were ok.  The kids built their own campfire and cooked their pork and beans and by sunset, they didn’t know what to do!!  We received several very funny radio calls that asked what time it was every 15 minutes for an hour and then asked what we had for dinner and if we were watching any good movies.  It was pretty funny as it was only 5:30pm.  We saw the fire they had built had gotten bigger and they were running around screaming and having a good time.  I think they wore themselves out.  After the fire burned out, they went into the tents and we were told the next day, that they talked about computer games and card games before they went to sleep.   We thought for sure the next morning they would call right away because they were hungry or bored.  They didn’t call and stayed on the beach the whole afternoon, even through a squall!  They only called to tell us that a squall was coming and that they were having a great time!  It was fantastic to hear that they were having such a great time.  They can’t wait to do it again. 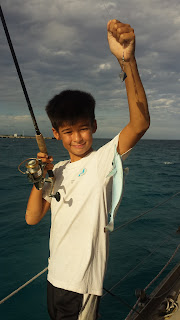 Horatio getting ready to fish 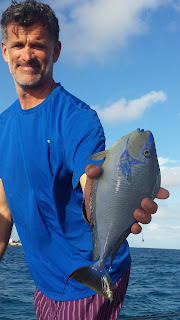 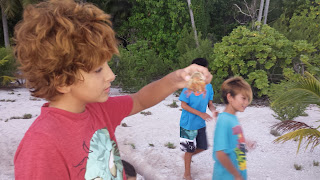 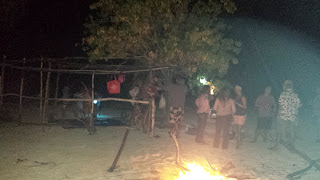 Cocktails and bonfire on Makemo beach 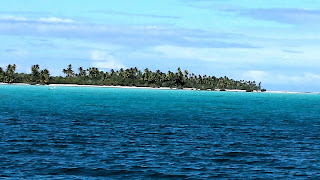 Tahanea
After spending a week in Makemo, we decided to check out another atoll.  It was also a very sad time as Pesto was planning on staying in Makemo for another two weeks, at least, and in the atolls for at least another month or two.  They had family coming to visit them in the atolls and we also had family that was arriving in Papeete (another 200-250 miles away).  So, we had to part ways with our very good friends that we had been cruising with since Mexico.  The kids were so sad as they had become so close with Raquel and Paulo.  It was a hard time for all as we said our goodbyes.  We know we will see them again, but maybe not until next year.
We arrived in Tahanea, which is another atoll about 50 miles west.  It is supposed to be a national park as no one lives on this atoll.  So, no village, no stores.  Fresh food was getting in short supply, but we were still enjoying ourselves.  Tahanea is a beautiful atoll.  Lots of white sand beaches and lots of coral beaches.  We snorkeled in the pass which is a huge reef.  It was AMAZING.  Just how clear the water was and the colors of the coral and the types of fish we’ve never seen before.  It was so lovely.  We only saw one black tip shark and that was about it for sharks.  We wish our camera took better pictures as it does not do justice to the colors and view of the sea life.   We enjoyed being in Tahanea for a few days of snorkeling and exploring.  Very quiet and very peaceful. 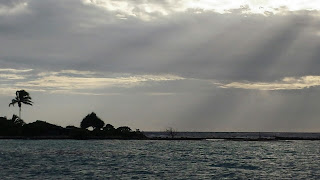 Inside the lagoon in Tahanea - you can see the ocean on the other side of the sand (that is how close you are to being in 1000 ft of water vs. anchoring in 35 ft of water. 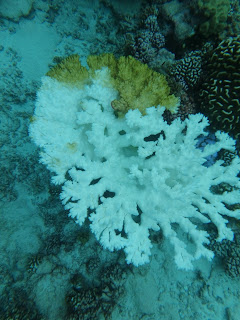 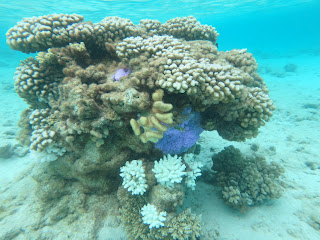 Brightly colored  coral
Fakarava
We left Tahanea and went another 50 miles west to the atoll of Fakarava.   This is one of the larger atolls and has two passes and a village with a couple of magasins.  But we never made it up toward the north pass (25 miles north) where the magasins are.  So, no fresh food again.  We entered the south pass and anchored there for several days.  When we arrived into the pass, we noticed several dinghies in the water as lots of folks were drift diving or snorkeling in the pass.  You basically take your dinghy into the pass and jump overboard and drag the dinghy line behind you.  You typically drift out during slack tide and then wait for the tide or current to take you back in and hop back into your dinghy.  Or you hop back in because there are a lot of sharks!
Upon arriving into the southeast anchorage, we met a family on Blue Raven.  They have two daughters, close to Horatio and Noah’s age. They invited us over for cocktails and we met two other boats, Valvini and Cartago (sp?).  Everyone is so fantastic trading sea stories and passage stories.  It really is a small family when it comes to sailing as you typically end up seeing these folks again at another island/anchorage.  The kids played on Blue Raven one day and met two boys their age from the boat Kandu.  We met one of the boys from Kandu in Nuku Hiva, but they actually got to hang out with both of them 300 miles away from the Marquesas.  What a small world!
Sarita was also in Fakarava and we spent a day exploring the beaches with them.   Horatio and Noah had a great day with Katia on a small sand island to themselves while the adults explored the other beaches.  We also spent another day snorkeling in the pass with Sarita.    AMAZING!  Like Tahanea, so much coral, so alive with fish and soooo many SHARKS!  Black tip and white tips sharks.  At least 20 sharks swimming around us.  It can certainly be unnerving, but they don’t really bother you.  As long as they don’t start to circle you, or seem to be aggressively coming toward you, it was fine.  We saw no circling or aggressive behavior at all.  Wow! 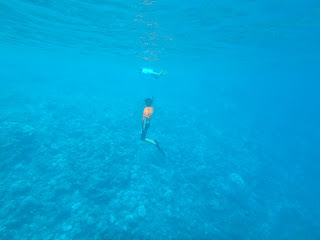 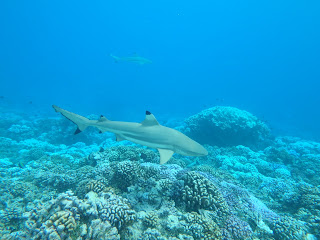 Black tip shark - one of many 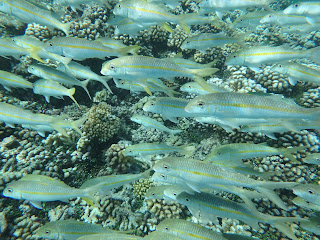 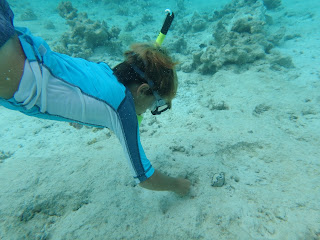 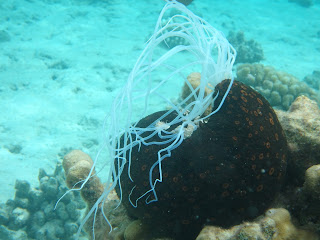 Not sure what this is? 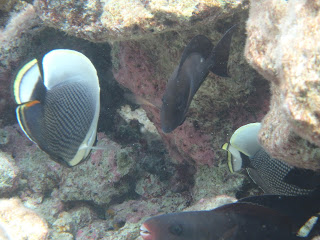 Any ideas? We saw so many, but do not know what they were 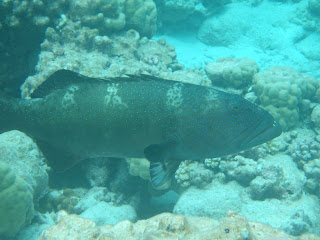 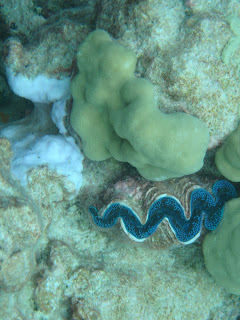 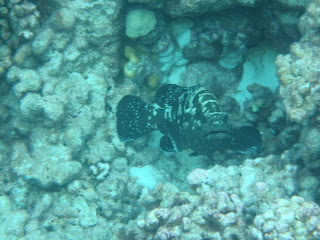 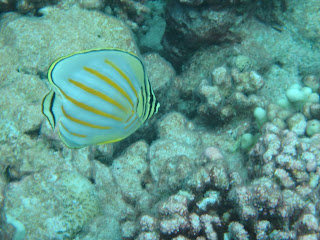 Now it was time for us to start thinking about heading toward the Society Islands, where our first stop would be Tahiti, with a real city and real grocery stores and wifi!
Posted by enough sailing at 5:50 PM