Engine Rebuild
Vuda Point Marina has a couple of options when wanting to haul out your boat.  You can haul out and be placed on the hard stand, where the boat is raised up out of the water to sit on stands on land, so the boat is about 10-20 feet above your head or be placed in a Cyclone Pit.  We chose the cyclone pit as this, we felt, had less of "drop" for removing the engine. Also, we would not have to climb so far up and down to get on and off the boat.
This also came in handy later, as we re-painted the topsides of the boat, and did not need a ladder!  We could actually stand on the ground and sand and paint without scaffolding.  Score! (well, it seemed like a score considering being in the pit for almost 2 months!) 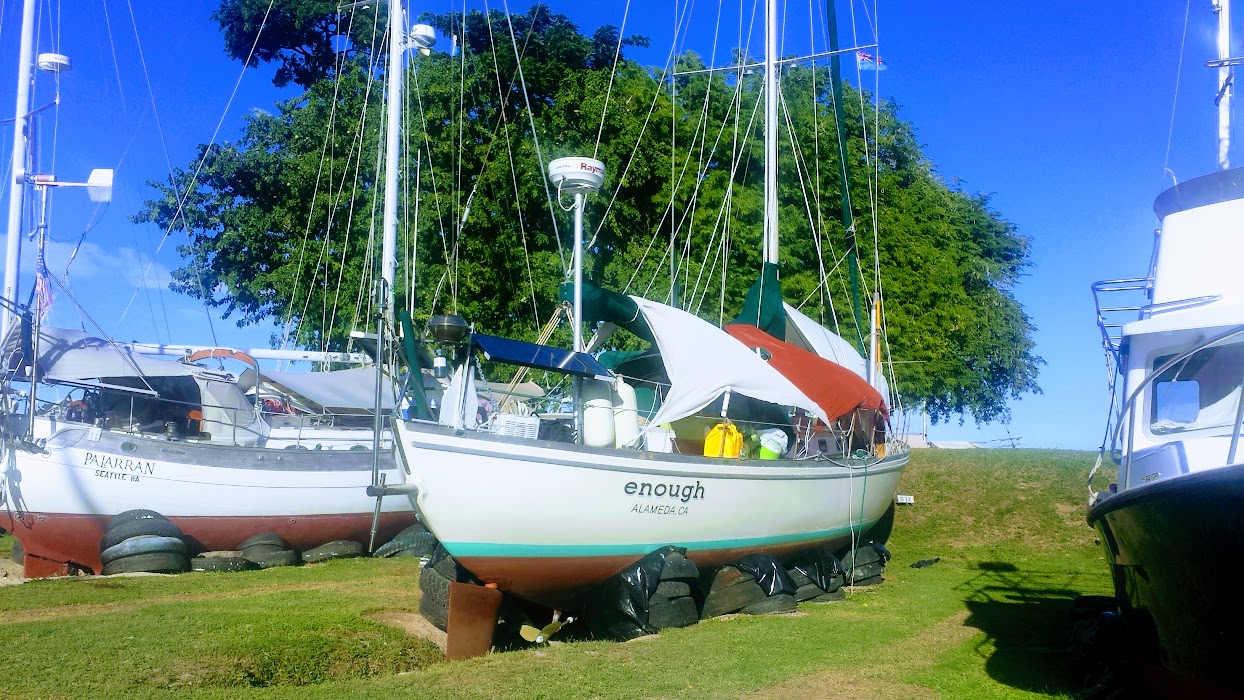 Enough in the cyclone pit with sun-shading.  It was hot.

First order of business was to get the engine off the boat so we could get it delivered to All Engineering. An engineering shop in Lautoka ( 2nd largest city on the island of Viti Levu).  Geoff tried to remove as much as he could before hand so the engine could actually fit through the compartment hatch.  Lots of winching and lines to get it straight out of the engine compartment and swung over and down off the boat. 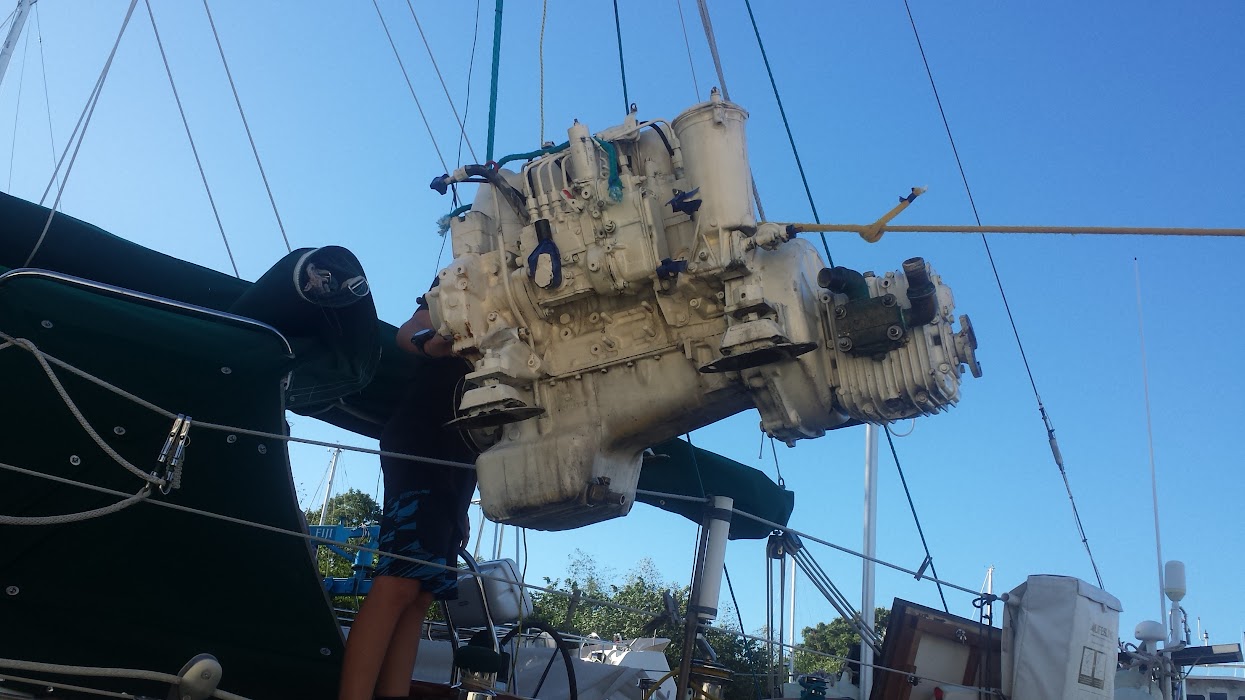 Noah guiding the engine down 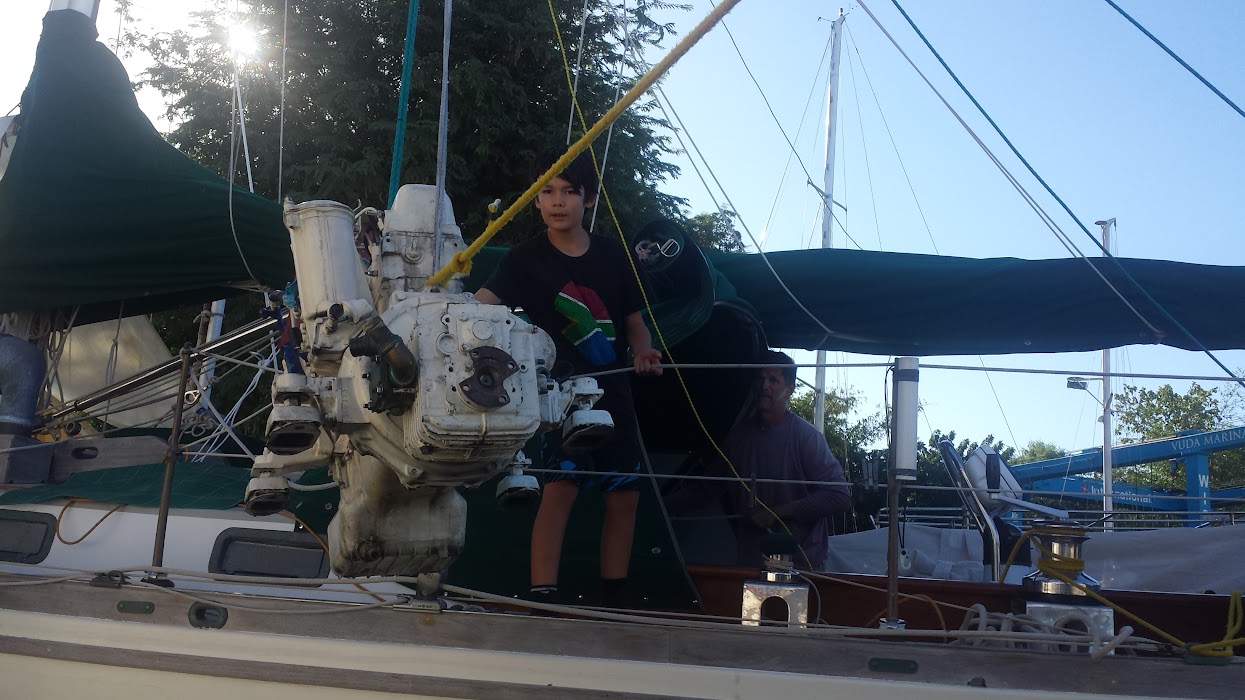 Making sure it doesn't drop or hit the boat 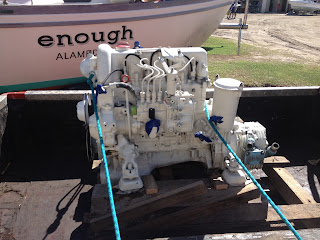 Lowering it down onto the truck 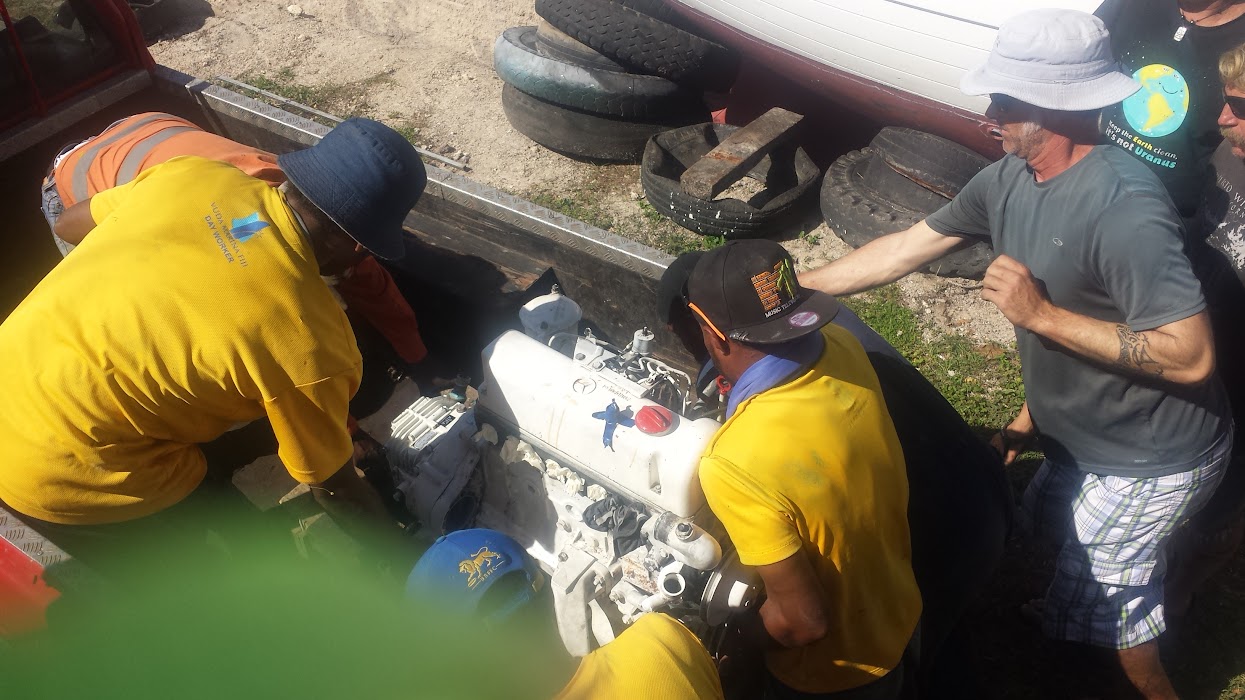 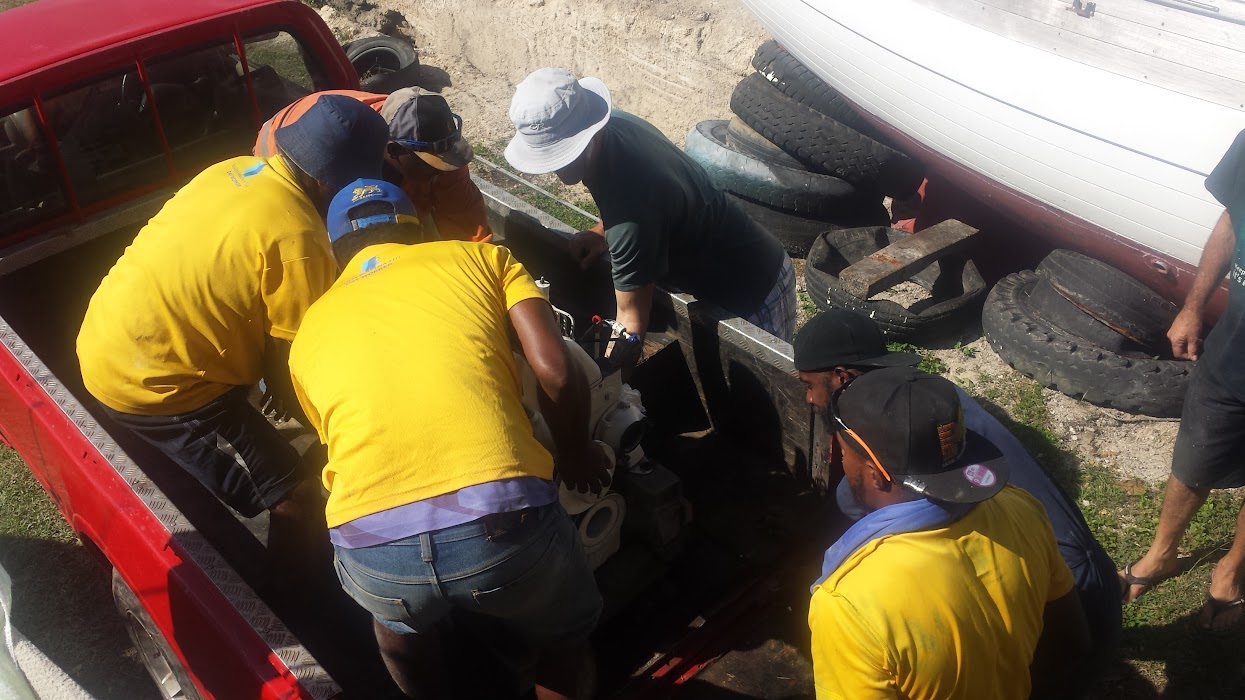 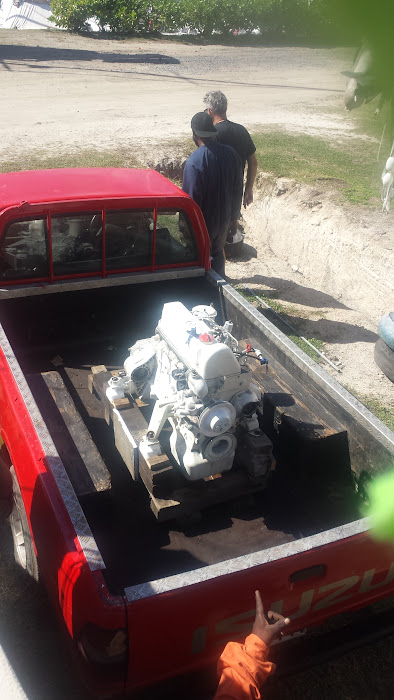 Ready for delivery to All Engineering in Lautoka  (city about 15 minutes away from Vuda).

After getting it delivered to All Engineering, it was determined that they did not have the correct tools to actually take apart the engine compartment!  Geoff had them bring the engine back and ran to some engineering shops and was able to borrow the right tool and opened it up himself.  He ended up building a work bench himself from scrap wood found around the yard.  He took the engine apart himself and only had the new sleeves sent to All Engineering to be pressed in and honed properly. 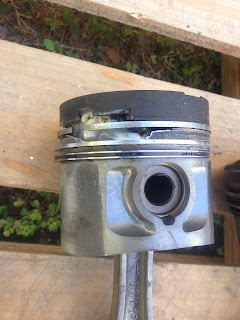 So, this is what was discovered -
Cracked rings on the pistons and holes.   3 out of 4 looked like this! 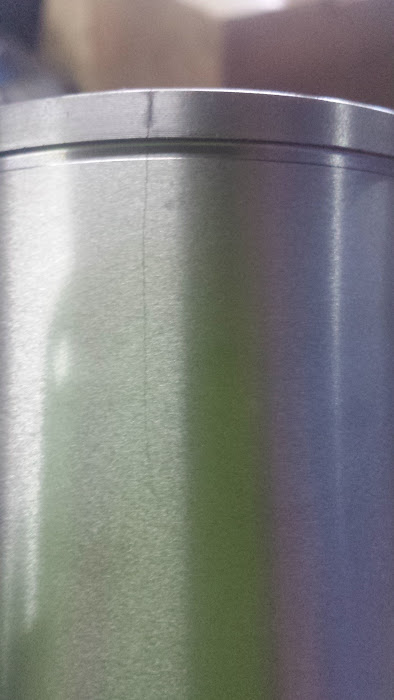 Cracked and chipped sleeves.
This was actually a new sleeve that we ordered and was sent to us and ended up being cracked.  We had to wait another 2 weeks for another one to be shipped. 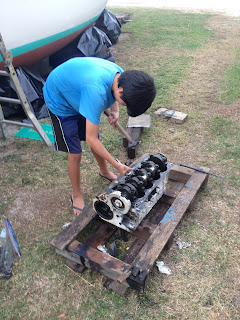 Horatio learning about re-building an engine 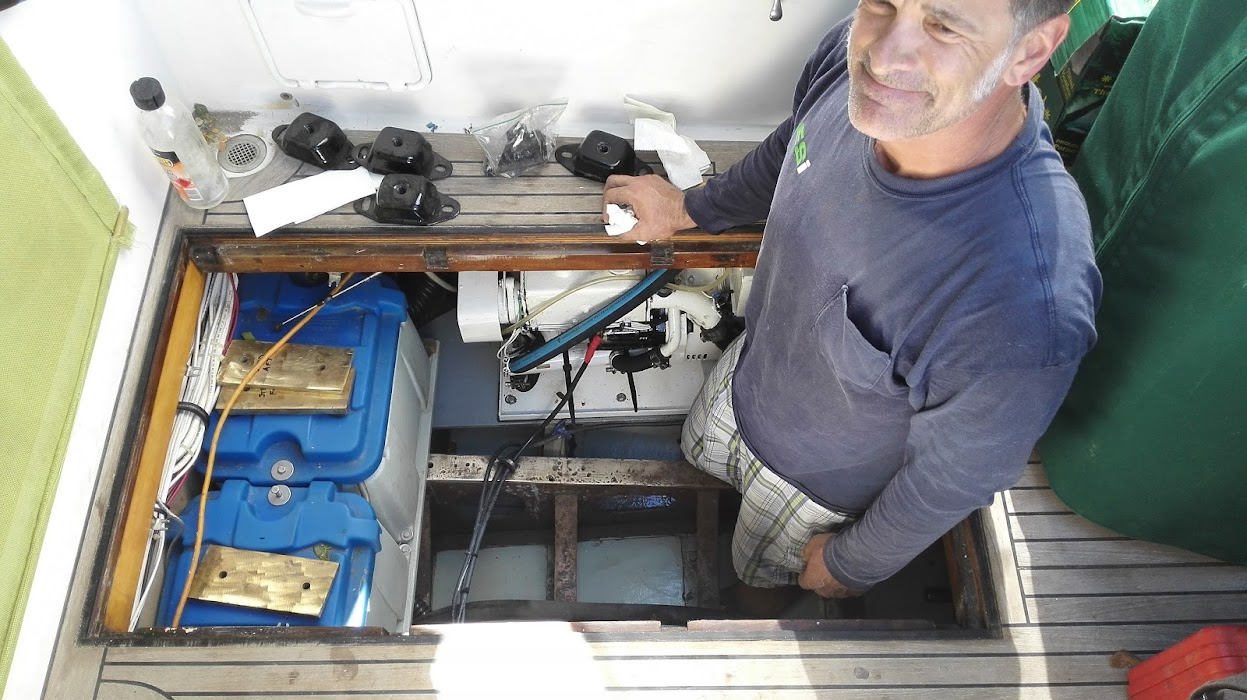 Geoff standing in the engine compartment ready to fit the pan back in. 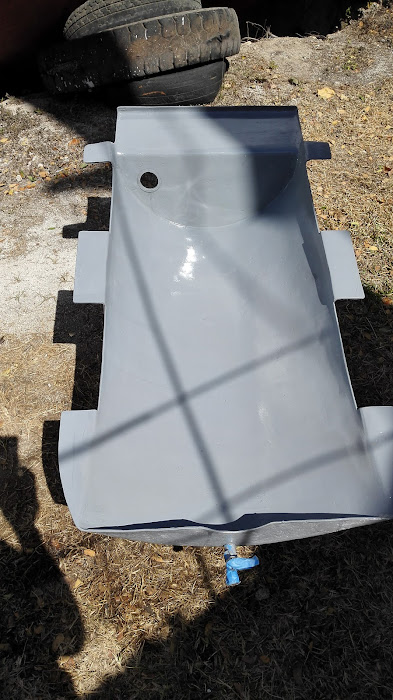 The pan was re-epoxied and painted 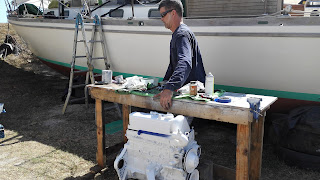 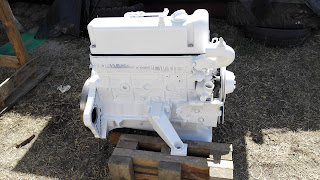 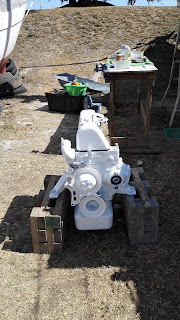 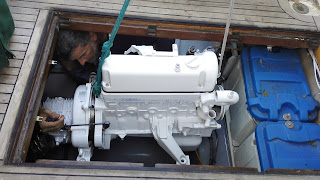 Ready for the newly re-built engine to go back in 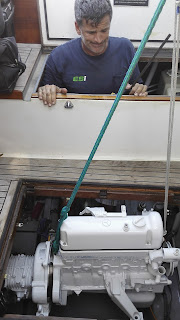 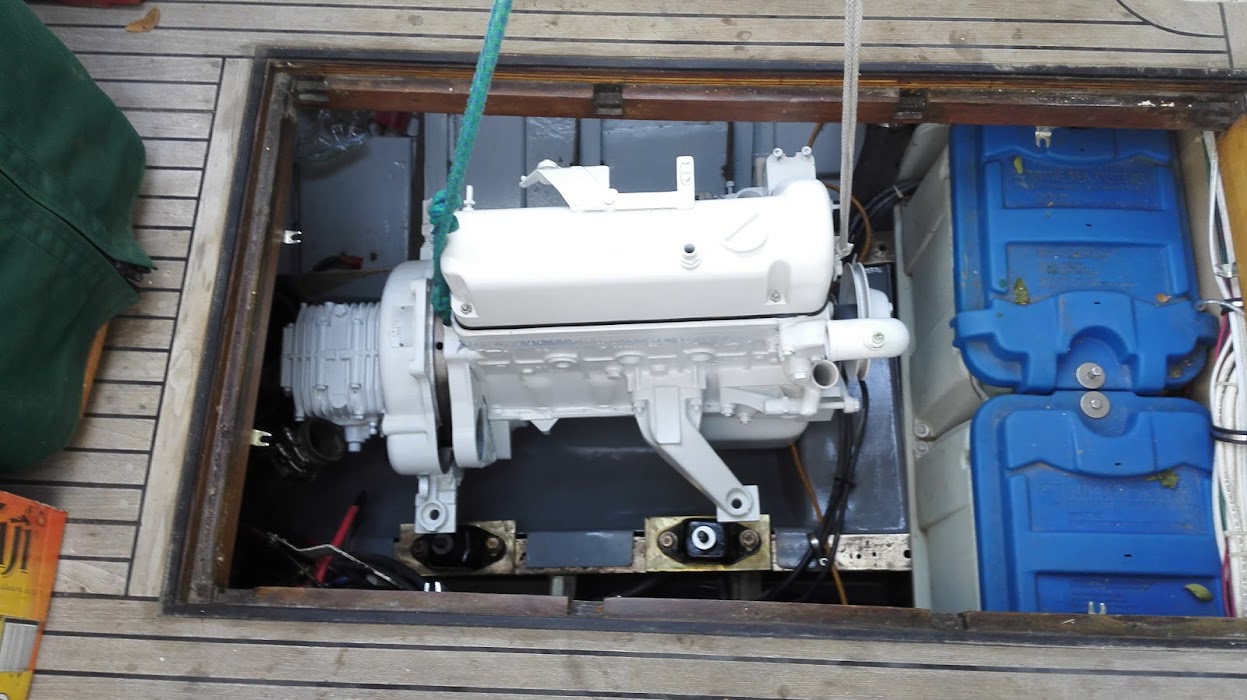 And down it goes.

From here, Geoff attached everything, nuts, bolts, hoses, etc., back in the right places and ensured everything looked good.
Geoff ran water to the boat and then tried to start the engine.  Success!  It sounded really good also!
After two long months in the pit, it was a relief.  We just needed to actually start sailing/motoring to actually test it under load.

One of the reasons why we spent two months in Vuda, was the amount of time to get parts shipped. Around 2 weeks for delivery.  Also, we had parts that were damaged and needed to be shipped again.  Geoff also went to S. Korea for work and that was about 3 weeks.  Getting the sleeves put in and honed took another few weeks.  All in all, Geoff said it would have been cheaper and faster to buy a new block and install it himself.  Oh, well, lessons learned.

We did enjoy a weekend away from Vuda while waiting for parts.  We went to Suva, the capitol of Fiji.  It is their largest city and is a main port.  We went to check out the city, but also to see a Fiji rugby match.  We had never seen or been to one, so it was an adventure. We took the bus from Lautoka to Vuda-about 4.5 hours. Nice scenery along the way, sorry, no photos.    In Suva, they have a very large fresh fruit and veggie market.  It was great. All produce is so inexpensive.  You can get a "heap" of eggplant, about 5-8 pieces, for only $2 Fijian dollars, which is $1 US dollar!  Bag of carrots or green beans or tomatoes or cassava or squash for $2 Fijian dollars.  Pineapple and bananas and papaya!
Fiji definitely had more selection and options than Tonga or French Polynesia. 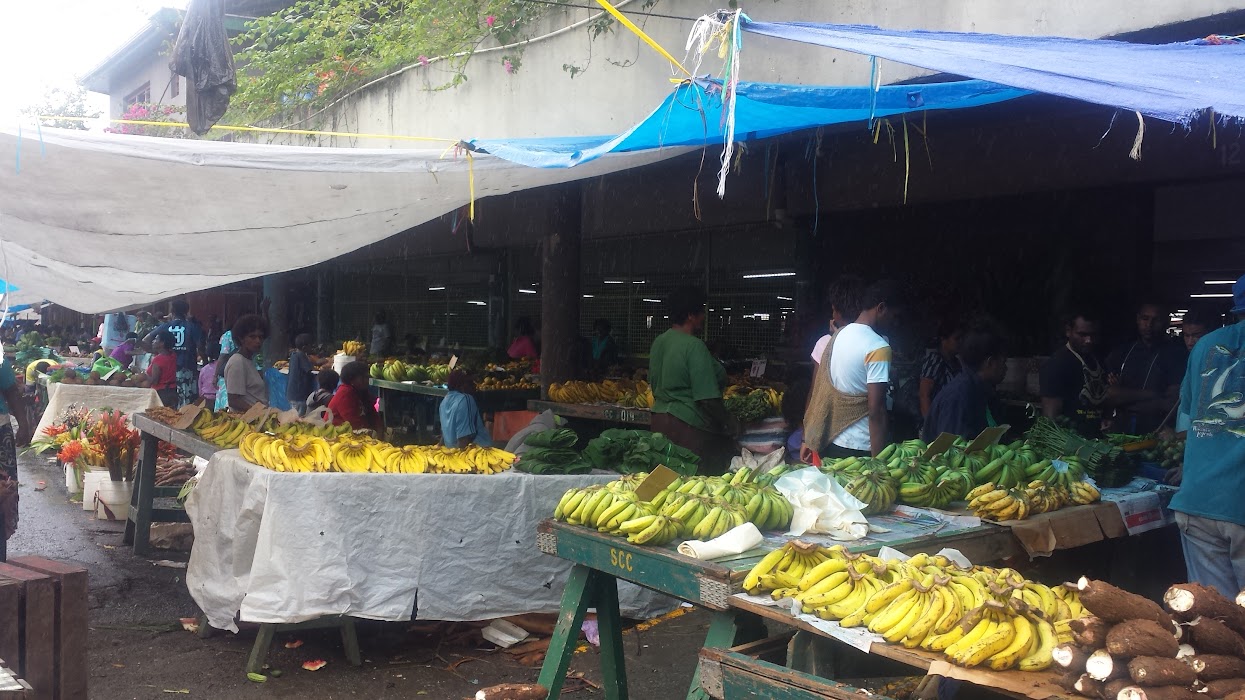 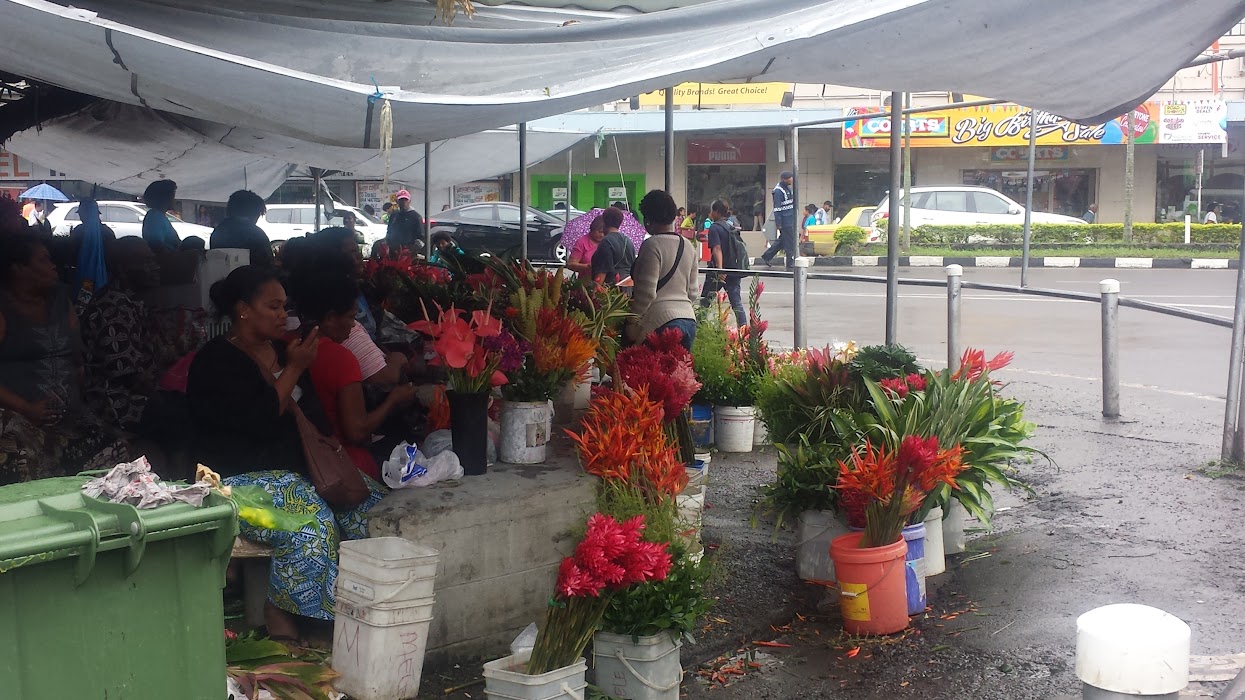 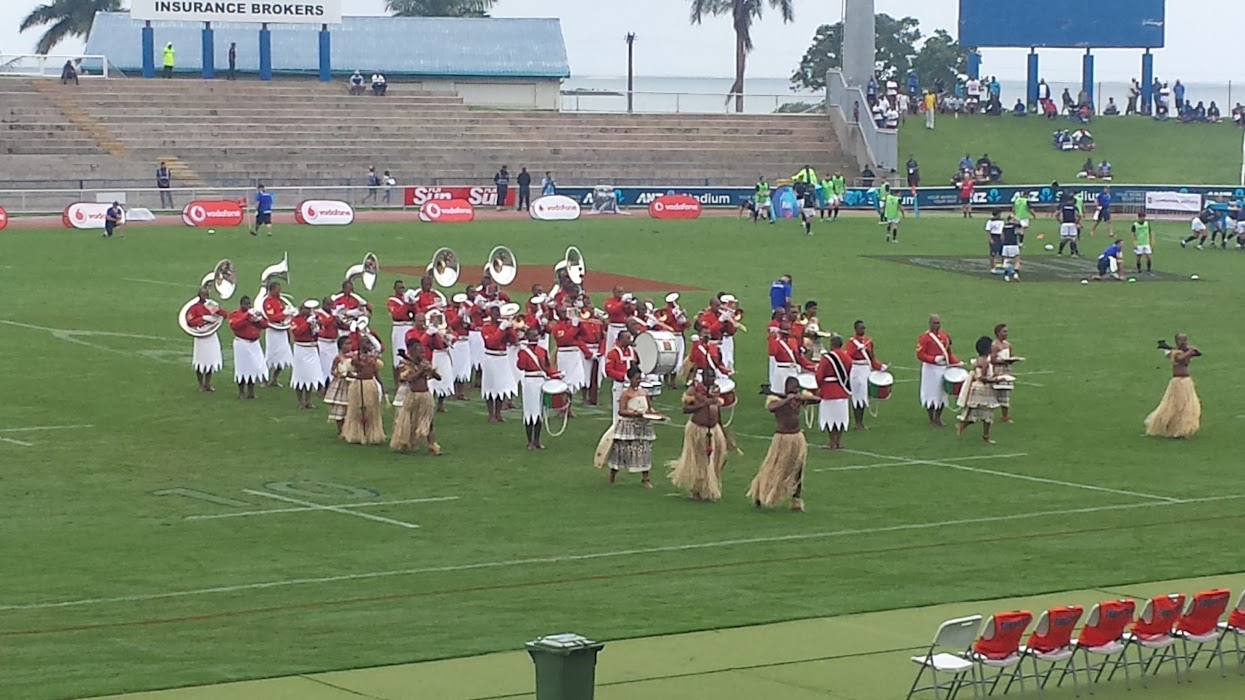 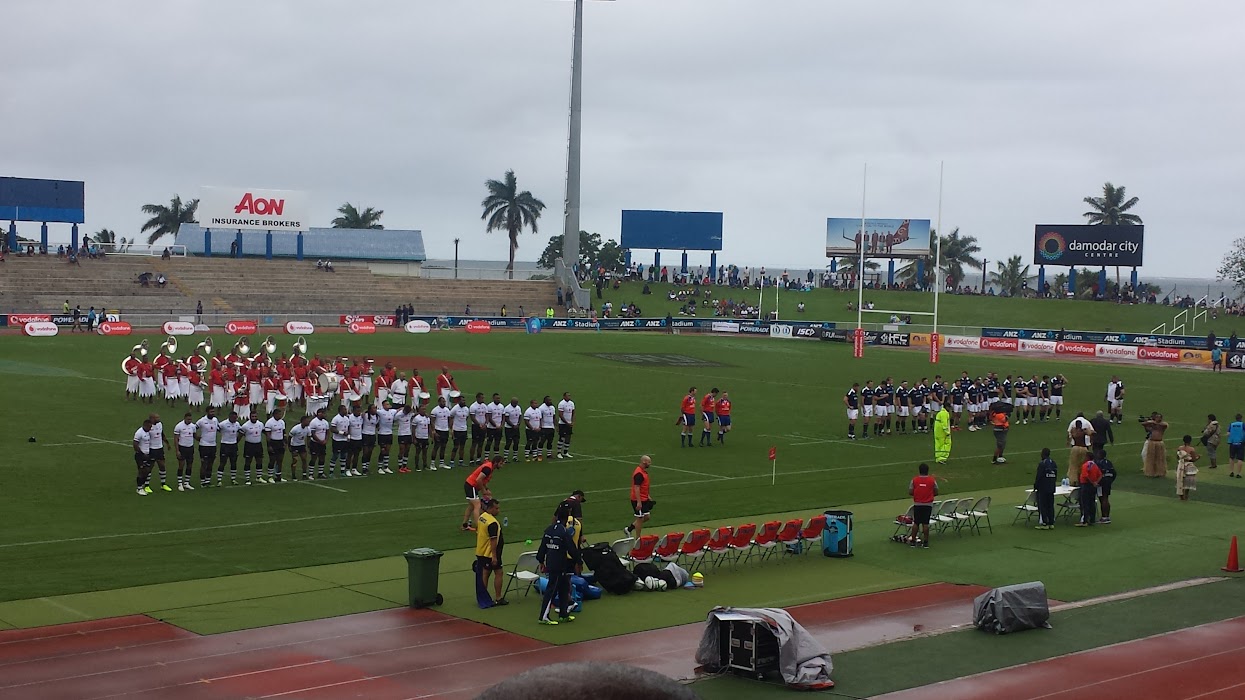 Teams lined up for national anthems 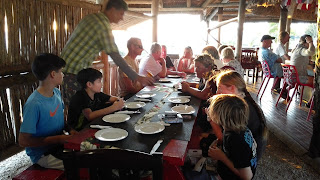 Before leaving Vuda, we met up with our friends from SV Be and Be
and SV Free Spirit for dinner at the Boat Shed restaurant. 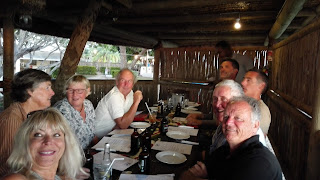 SV Free Spirit and SV Be and Be friends 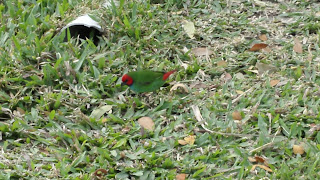 not sure what this bird is called, but the most vibrant bright green 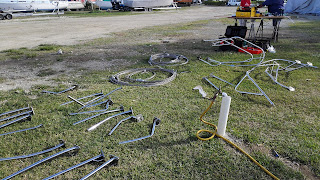 There was a boat being taken apart and having damaged parts put on it.
It was for a shipwreck movie that was being filmed in Fiji 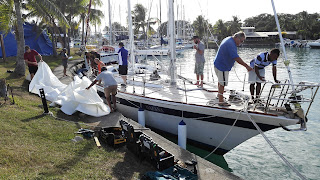 It was almost sad that they were pretty much taking apart a new boat
and going to crash it for a movie.

Next up:
After completing the engine rebuild, we were ready to start cruising and seeing the islands.  First was a "kid boat camp out" on Navadra Island in the Yasawa island chain.